Earlier this week the Rhode Island Self Defense Alliance published an initial list of candidates in this Fall's midterm election who are defenders and enemies of your obvious and natural right to defend yourself and family from a predator.  The response from our supporters was overwhelmingly positive, and the response from our opposition was, in a word, comical.

So much so, we felt it would be fun to share this with you.

State Representative Jason Knight of House District 67 (Barrington and Warren) and Teresa Tanzi of House District 34 (Narragansett and South Kingstown) illustrate well how scared the Progressives are in Rhode Island. You may remember Representative Knight from this video in which Allen Giberti of the Rhode Island Log Cabin Republicans completely destroys Knight's sponsored legislation which would leave some of the most victimized citizens in Rhode Island defenseless: 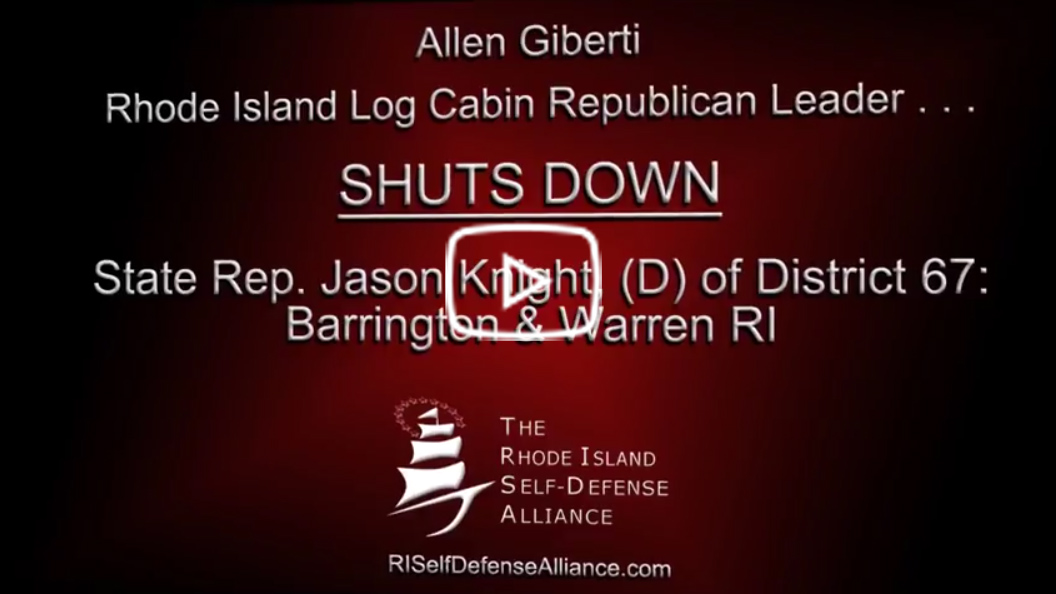 Clearly, Representative Knight wishes to render defenseless the most vulnerable in our society, and Representative Tanzi supports these efforts wholeheartedly.  Indeed, when one considers the frightening vulnerability to a predator's brutality for all too many women, the physically disabled, and members of the LGBT community, it's hard to imagine examples of more blatant hypocrisy, and callous disregard for the most fundamental right of all people than this.

And what is Representative Knight and Tanzi's response to our efforts to inform you of these facts?  One only needs to view their Twitter accounts to see: 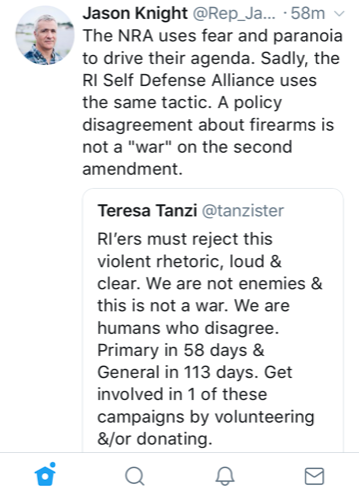 As one would expect from politicians concerned more with acquiring power over law abiding citizens than truth and justice, Representatives Tanzi and Knight twist their oppositions' message to serve their anti-Constitutional goals.  At NO TIME did the RISDA use the word "war" or imply violent rhetoric.

These are the words of politicians who know their positions are indefensible and their General Assembly seats are in jeopardy, so they must mislead and obfuscate, as opposed to standing on principle and defending their views with valor.

The Rhode Island Self Defense Alliance is funded and supported ONLY by the people of Rhode Island, people like you.  The rhetoric of the Progressives in Rhode Island only show how scared they are that their influence over you and your life is being challenged like never before.

We ask that you help us keep applying this pressure!  Please donate to our efforts to finally turn the tide in Rhode Island away from these failed policies to the prosperous governance we are seeing all over America where the Progressives have been defeated and those who value the principles that make America great were placed in office.